Posted at 03:05h in Uncategorized by S. A. Foster 0 Comments 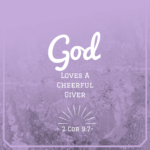 Each of you should give what you have decided in your heart to give, not reluctantly or under compulsion, for God loves a cheerful giver. 2 Corinthians 9:7

This verse in 2 Corinthians is often quoted on Sunday mornings right before offering.  It is a reminder not only of the importance of giving, but also what our attitude should be as we give.  In the Gospels of Mark and Luke, we find a story about a poor widow who gave all she had (Mark 12:41-44; Luke 21:1-4). Scripture says that Jesus sat across from the area where the offerings were being collected and watched as the people put their money in.  The rich gave large amounts of money, while the poor widow stepped up and dropped in two small coins that were only a few cents.  Upon seeing this, Jesus informed the disciples that she had “put more into the treasury than all the others” because she “put in everything – all she had to live on (Mark 12:43-44).”  In this story, there are a few lessons we can learn about how to give distinctly.